Sprout: The Des Moines Urban Youth Learning Garden at Drake University was established in 2012 through the work of environmental science students and a grant from the State Farm Youth Advisory Board.  It serves as a community hub for environmental education and healthy food access for the neighborhood surrounding Drake University.  Produce from the garden is donated to the community through the Little Free Pantry, the Boys and Girls Club, and to students and volunteers.

The Sprout Garden was originally located on Forest Avenue, near the Knapp Center and Boys & Girls Club, but due to new development the Sprout Garden had to be relocated.  The new location at 30th & Carpenter is a prime location as the gateway to campus.  The move also offered an opportunity for a redesign and introducing new features.  Through word of mouth and our previous work at DMACC, Abundant Design was selected for the project. 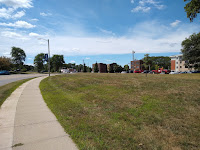 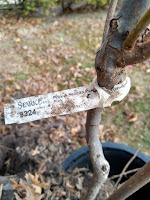 Meetings were virtual, budgets and timelines were tight.  Permits & getting approvals pushed back the start date, and approaching winter could put a hard stop on the installation.  Trying to reuse and bring over from the existing location as possible we took inventory of what we could salvage.  Ideas and possibilities were discussed among potential interested parties, with the current open space redesigned through several rough drafts into a food forest park, with permaculture tree guilds, runoff capturing rain gardens and gathering spaces. 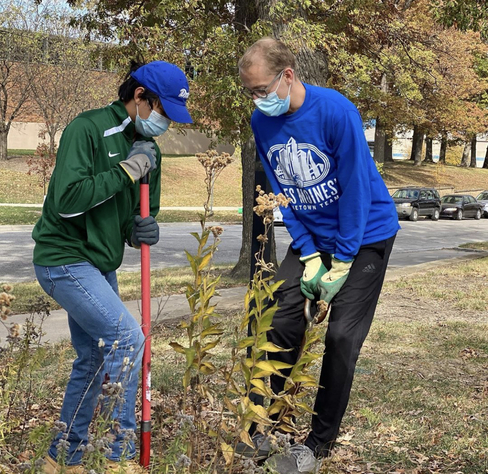 The garden shed was next, along with the rain barrel, and a new gathering/presentation space. Almost stadium style bench seating was built with the limestone brought over.  The existing gingko trees from the green space were moved into the parkway for street trees requirement.  This conserved budget and gave us lower growing trees as not to shade the garden production areas.

The Drake facilities team members were great to work with, and getting the shed and arbors moved. 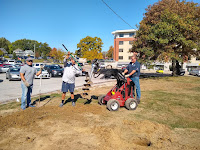 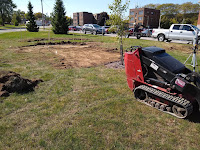 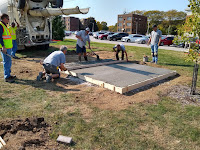 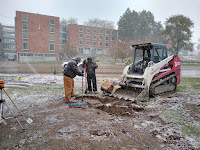 That early first snow gave me a scare that the nice weather wouldn't last! 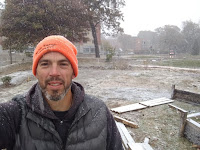 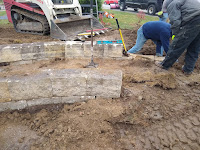 But luckily it did!

Garden beds were modified from the previous rectangular beds (seen above) to keyhole beds using the aged but mostly reclaimed lumber.  These keyholes allow for easier access to the plantings while increasing overall growing area, all with a smaller overall footprint.

Wood cores will give them an almost hügelkultur effect, feeding beneficial fungi and helping to retain/wick moisture.

At the end of Season one had the garden space moved and a great start on the mainframe of the forest garden park.

You can follow the Sprout Garden on Facebook for gardening tips, community resources and volunteer opportunities.
Posted by Abundant Design, LLC at 9:51 AM