Say "Hello!" to our Summer Intern

I'd like to take this week to introduce Michael who has been helping out and learning with Abundant Design this summer.  I should have written earlier this summer, but there's still some time yet before he has to get back to school.

I grew up on my family's corn and soybean farm in central Iowa.  After completing my Bachelors in Sociology and Communications, I spent several years in the mortgage industry.  Currently a student in Ag Business Management (At Hawkeye Community College), I was looking for an opportunity that fit my interests better than say, following a seed rep around for the summer, and that's what lead me to Abundant Design.


What interests do you have that make you a good fit at Abundant Design?

Worms... worms for speeding up compost and you can do it year round.  They are really interesting.


What are you most looking forward to this summer, and what has been your favorite project so far?

I really enjoyed learning about rain gardens, and then taking some of what I had learned for the rain garden I had been planning for my own home.
I'm looking forward to helping with some edible landscaping designs using permaculture principles.
﻿﻿
﻿﻿﻿

I've really enjoyed getting to know Michael this summer, and appreciate his passion for the environment and good food.  He will be an asset to an evolving agriculture, whether that's urban or rural.  Michael is a hard worker and an eager learner.  He's even taken a week off to complete his own Permaculture Design Certificate course this summer.
﻿﻿﻿﻿﻿
﻿
﻿Thanks for all your help so far Michael!

Chop & Drop - pruning, mulching and so much more

Chopping and dropping plants, is a great way to maintain your plantings.

The resulting layer of organic material acts as mulch; retaining moisture, shading the soil and hindering weed seedlings.  Over time it is broken down by bacteria and fungi, or gobbled up by earthworms.  These processes change it into nutrient rich organic soil.

Check it out in the video below-

Whether your overgrown favorites, unwelcome weeds or specially designated mulch plants, these all can add to your soil.
Timing is another factor with Chop & Drop.  Done when it is cool and rainy, your mulch plants recover well.  Done after flowering before seed set and you can end annual weeds life cycle, preventing weeds the next season. If its hot and dry, and done multiple times you can really hinder regrowth from tough perennial weeds.

Chop & Drop is a basic, yet core skill when establishing permaculture landscapes.

Stay cool and hydrated this week!

Last week we talked about Japanese Beetles, and pesticide free solutions.  I must say the bait traps have worked amazingly well.  The first two days after placing the traps, I only found two beetles on my cherry tree.  So happy for that!  I have dumped gallons of the dead ones into the compost bins, and they stink.  I posted a video of me dumping the trap into a bucket of soapy water to dispatch them.


Too many bugs for the included bag so I ended up opening the bottom and placed a 5 gallon bucket filled with soapy water under it to collect them.  That seemed to work a lot better and stress the ties and the bag attachment less. 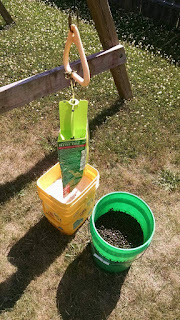 I think the worst has past, but will still apply the milky spore and "attack nematodes" around our yard and maybe a couple neighbors' if they let me.

Good luck with yours!
Posted by Abundant Design, LLC at 3:06 PM No comments:

This year has been the worst year ever for us in our yard as the Japanese Beetles have attacked with numbers I have not seen before. 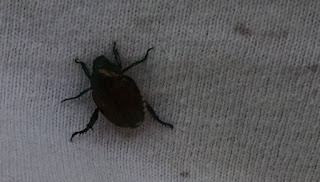 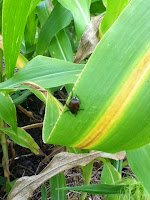 Japanese Beetles are an iridescent copper and green colored beetle, about 1/2" long.  They probably came to the US in the early 1900s and were first discovered at a New Jersey nursery in 1915.  By 2006 the pest had not spread much past the Mississippi River, but the next few years saw infestations across the country.

They eat the leaves of your plants, leaving the skeletonized veins behind.  This kills the leaf and hinders its ability to perform photosynthesis (using the sun's energy to make sugar, energy for the plant).  They can also carry diseases from tree to tree.  I'm guessing that's how one of our peach trees was infected with peach leaf curl. 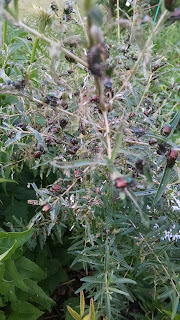 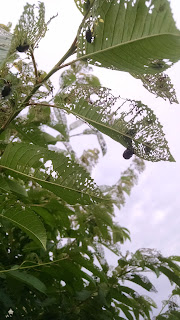 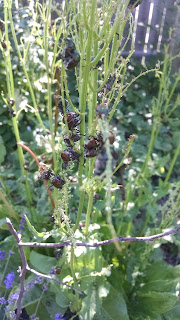 Our seaberries were almost completely stripped, cherry leaves were skeletonized and they even ate the developing seeds on our garden sorrel.  Most heartbreaking is the loss of our peaches.  We got most of the fruit last year before they discovered how tasty they were, but this year they went after them early.

The stories I have heard from nearby friends, or people that just ask me about them around town confirm we are not the only ones affected.  It has been a rough year.


In years past, the soapy water in a bucket trick worked quite well.  This year however, there have been too many, too fast and many of our trees have matured with branches out of my reach.  I used a soap solution in a backpack sprayer with limited success.  Quite a few were killed but many were also not affected and remained.

I have been hesitant to use the traps as they have been known to attract more than you would have otherwise.  I have ordered a few for our backyard now.


Even better is biological prevention.  Both Milky Spore and certain nematodes are effective at controlling Japanese Beetle larvae and other grubs in the landscape.  These will only control the grubs in your yard, so wandering beetles can still come from other areas.  Again I have put off buying any of these since we haven't had any turf damage, thought we'll just get them from neighboring yards anyway and just out of negligence.  They will be applied this weekend!  You can get a smaller sized bag, but I ordered the larger bag below so that I can apply a couple times, as well as the Heterorhabditis bacteriophora nematodes.


With any luck, and neighborhood cooperation, we'll do much better next year!

Posted by Abundant Design, LLC at 12:57 AM No comments:

Come to Waukee for its annual all-American celebration in honor of Independence Day!  Activities start at 3:00 p.m. with the parade beginning in our Historic Downtown and ending at Centennial Park. 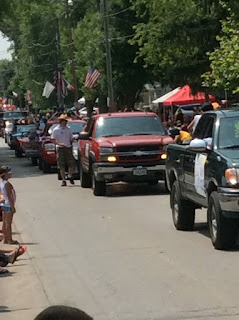 Following the parade, Centennial Park will have inflatables, music, food vendors and more. The band Abby Normal will take the stage at 5 p.m. performing acoustics, timeless rock songs and current hits. Stay all evening then enjoy the fireworks after dusk.


Enjoy the day, stay safe and say hello if you see us in the parade or at the park!
Posted by Abundant Design, LLC at 11:53 PM No comments: