Stovetop Popcorn: Easier Than You Think 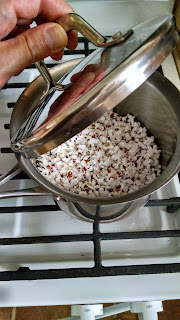 Popcorn is a fun and healthy snack.  It has a satisfying crunch and has an impressive amount of fiber-over one gram of fiber per cup.  This is great for people watching their diet, as popcorn can fill you up without a lot of calories if you go easy on the extras.  Also, it's gluten-free if you need to avoid that.

Popcorn is a whole grain, which means it contains the germ, endosperm, and bran.  This is in contrast to refined grains, which retain only the endosperm.  Besides the fiber mentioned above, popcorn is a surprising source of antioxidants, including lutein, an antioxidant that is good for your eyes.  The antioxidants found in grains, polyphenols and phenolic acids, may even be easier to absorb into our bodies than anthocyanin antioxidants found in berries and other colorful foods.  Corn also has B-complex vitamins, magnesium and manganese.

Many people are trying to limit the use of the microwave.  ...or at least avoid prepackaged microwave popcorn.  This week, I'll show you how to prepare popcorn on the kitchen stove.


This technique works with purchased popcorn as well as your own homegrown varieties.

UPDATE: Recipe tweaks for our favorite, plus you can add the butter right in
Gather and prepare ingredients as in the video-
Hack-  Follow video as directed, until you add the rest of the kernelsAfter waiting for them to come to temp, add the butter as you return to heatThis melts & spreads the butter throughout the batch while not allowing it enough time to brown and smoke 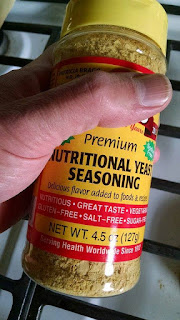 In addition to butter or more coconut oil and salt, sometimes we like to add nutritional yeast as an almost cheese-like topping.  For kettle corn try three tablespoons of sugar added along with the kernels.  If you are wanting a low calorie or fat-free snack, be mindful of the added extras.

Finally, if you must use a microwave, we have used 1/4 cup kernels in a brown lunch bag.  Fold the top over two or three times, microwave for ~2 minutes and it comes out just right.  It is nutrionaly similar to air-popped, which is low in fat.  (We just prefer the flavor and health benefits of coconut oil)

Now go pick out a movie to go with your popcorn and
have a great week!
Posted by Abundant Design, LLC at 11:50 PM