Jack's day is done, now what?

It's over...
King Jack's reign on the front stoop was grand!
He watched the leaves change to red and gold, but now they have fallen.
He watched the trick-or-treaters come and laugh, but they now are gone, too.
He gained an hour (really?) but now the evening comes sooner.

Who am I talking about?
You know... Jack. 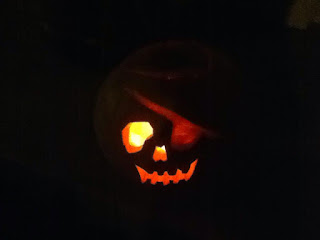 According to the Department of Energy, 1.3 Billion pumpkins are grown in the US each year.  Millions of pounds of these will soon be headed for the landfills.  They have been painted or carved into Jack O'Lanterns for holiday decorations and will end up in the municipal waste stream.

What can we do to prevent contributing to this problem?
If you live in the panhandle of Oklahoma or Vero Beach, Florida your pumpkins, and other trash, might end up in a biorefinery.

Unfortunately most of us don't live there, so what do we do?

Lucky enough to have pigs, or chickens?  They make great snacks for them, tasty and nutritious.  You will need to break them up a bit for chickens so they can get to the inside.

No pigs or chickens? They can also be composted, and will break down faster if broken or chopped into smaller pieces.

Hopefully if you carved Jack O'Lanterns, you roasted the seeds and composted the rest of the insides.

We can eat them too, and not just the seeds!
Pumpkin flavored everything can be found anywhere you look.  Cookies, coffees and more...  and don't forget pie! 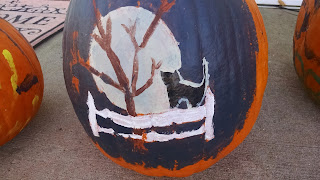 Skip the canned stuff and you'll be rewarded with a flavorful homemade version.  Make your own pumpkin puree with this recipe from the Clever Carrot.

If you opted to paint them this year or left them as plain decorations, they'll probably be ok yet for cooking, if they haven't gone through too many freeze/thaw cycles.  Don't forget to take the paint off!

Then once you have your puree (or if you carved a jack o'lantern and bought some) try some of these Pumpkin Recipes from Eating Well and Taste of Home.

For your own Pumpkin Spice mix try this recipe:

As a BONUS Treat, not Trick, the Sustainable Small Farm Online Summit is FREE (replay) until 9pm Central November 1st.

﻿
Have a great week! 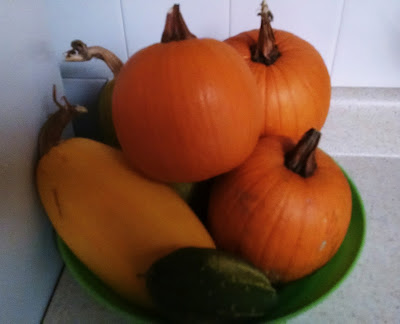 Posted by Abundant Design, LLC at 1:03 AM