Purple Coneflower of the Prairie - Echinacea 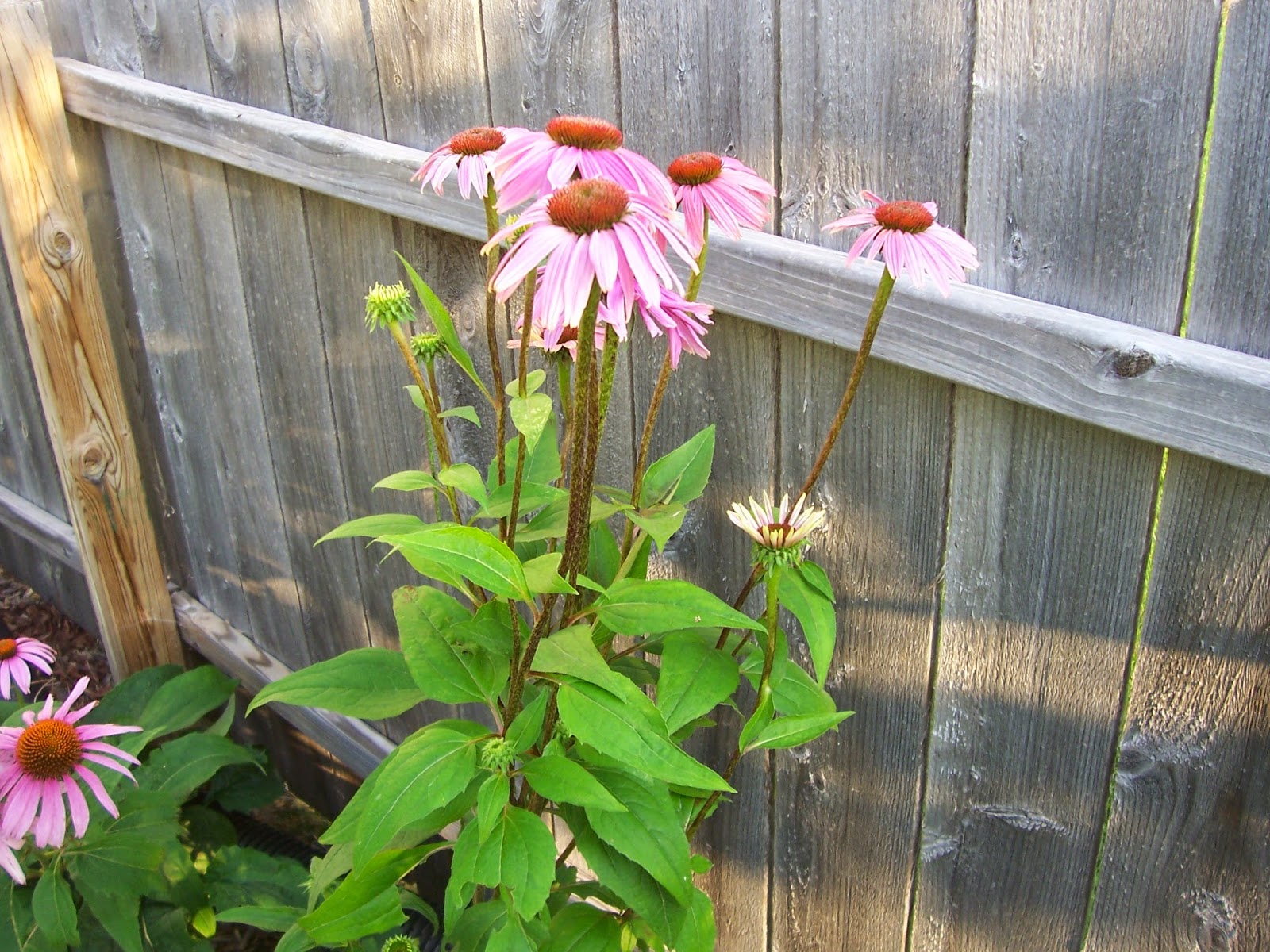 The most widely used wildflower in "Native Plantings" is probably the Purple Coneflower, and for good reason.  The lavender to purple, or on rare occasions white, blooms are large and long lasting.  The flowers sit singly on each stem, of which there are plenty per plant.  The leaves are rough edged and shaped like a spear tip.  The coneflower grows 2-3, or even up to 5 feet tall.  This makes it a showy addition in the back of displays, or near the center of planting islands.
Hardy Perennial 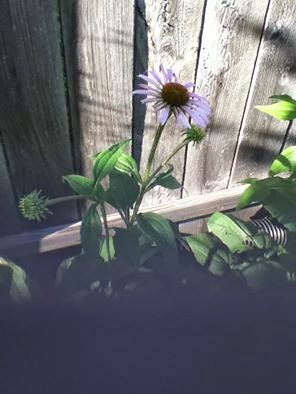 Easy to grow, it is native to all 48 of the lower United States.  It prefers well-drained soil, but grows well in almost all soil types, and is drought tolerant.  As you would expect from a prairie wildflower it prefers full sun, but as you can see in the picture to the right it also does well in part-shade.  This is a first year plant in my home forest garden, although most plants won't bloom until the second year.  Purple Coneflowers are usually started from seed which is easily found in most garden centers, collected on your own from plants in the fall, or traded with friends in a seed exchange.  Plant these seeds, which may benefit from a 60 day cool-moist stratification, in the Spring.  You can also divide the roots in the early Spring, and it can spread aggressively on its own.
Companion Planting 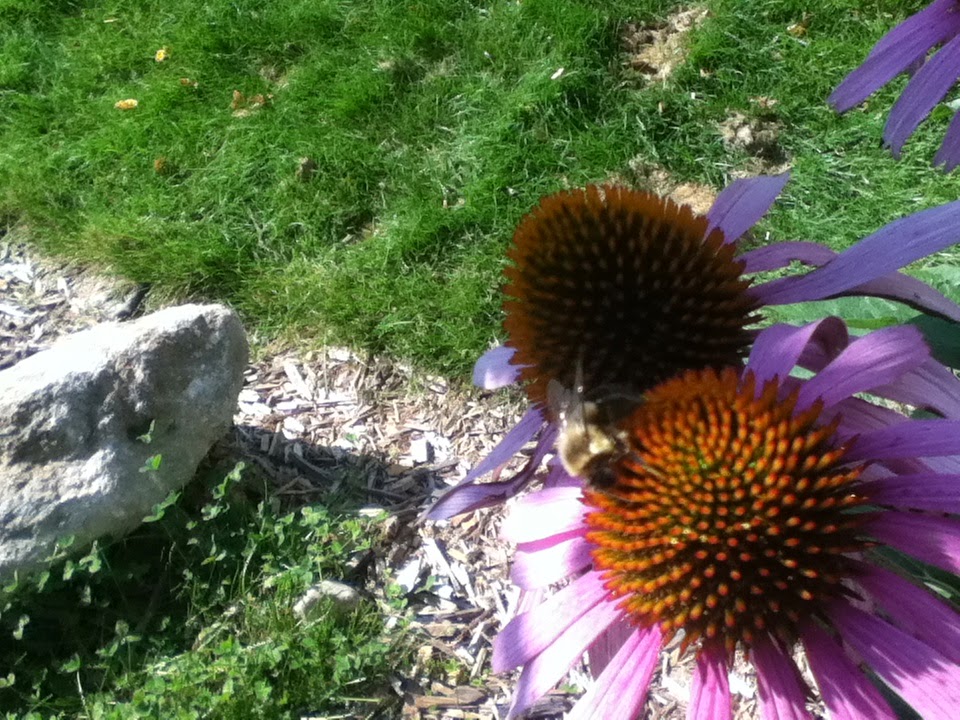 Using this plant in your landscape has many benefits besides being showy and easy to grow.  It is a Native plant and as such fits perfectly in native prairie plantings.  It is a great plant to attract butterflies and hummingbirds, so is one of the key plants in our Butterfly Gardens.  It is particularly beneficial to native bees and other pollinator species, and can provide habitat to boost populations of predators of many garden and crop pests.

Medicinal Herb
Beyond the companion planting benefits, Echinacea is a powerful medicinal herb.  The flowers, and sometimes the whole plant, are dried and used to make a popular herbal tea claimed to support a healthy immune system.  The roots have been used in a similar manner, harvested in the fall after the plants have gone to seed.  Roots should come from a plant at least a couple years old to be big enough to harvest.

Infusions can be made with water or Tinctures with alcohol, with different compounds resulting from each.  These are also widely available commercially.  The internet is full of recipes and vendors.

Here is more information from the USDA plant guide on Echinacea.

Echinacea is widely used as an herbal remedy today. A purple coneflower product containing the juice of the fresh aerial parts of Echinacea purpurea was found to make mouse cells 50-80 percent resistant to influenza, herpes, and vesicular somatitis viruses. This product was available in Germany in 1978 (Wacker and Hilbig 1978). Perhaps the most important finding so far is the discovery of immuno-stimulatory properties in Echinacea purpurea and E. angustifolia (Wagner and Proksch 1985, Wagner et al. 1985). Stimulation of the immune system appears to be strongly influenced by dose level. Recent pharmacological studies indicate that a 10-mg/kg daily dose of the polysaccharide over a ten-day period is effective as an immuno-stimulant. Increases in the daily dosage beyond this level, however, resulted in "markedly decreased pharmacological activity" (Wagner and Proksch 1985, Wagner et al. 1985). Other research has shown that the purple coneflower produces an anti-inflammatory effect and has therapeutic value in urology, gynecology, internal medicine, and dermatology (Wagner and Proksch 1985).  Emphasis added
For Everyone 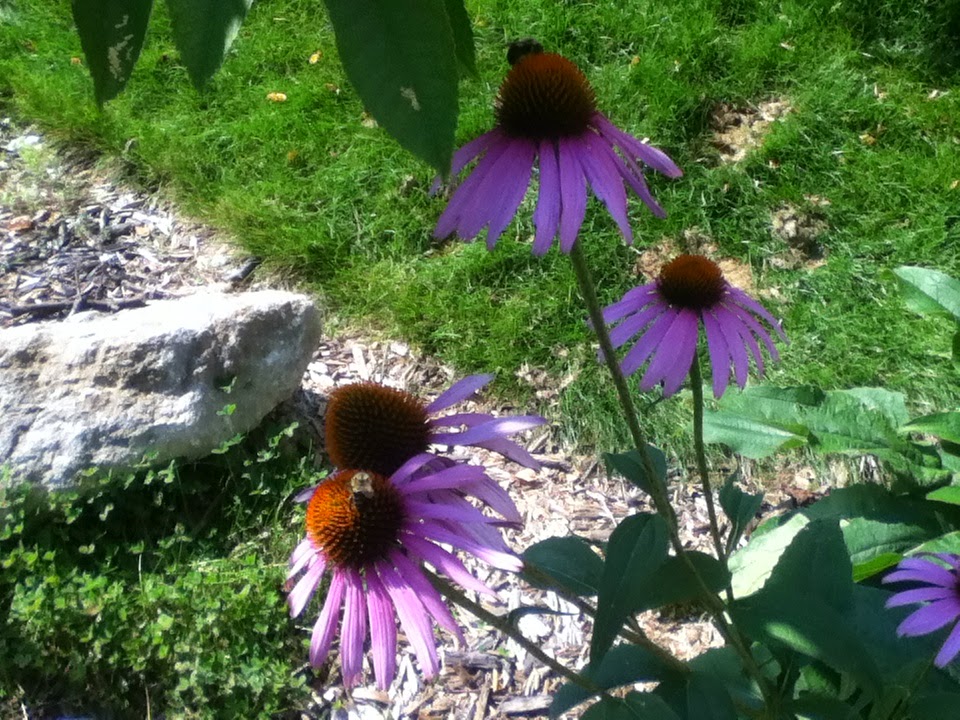 Echinacea or Purple Coneflower should be a part of everyone's gardens or property.  With its decorative appearance, synergistic benefits and its herbal value it can be an integral part of your sustainable and resilient landscape.
As always, if you need help installing butterfly habitat, native plantings or any other of our services contact us at AbundantDesign@Hotmail.com.

Fall is actually a perfect time to get  raised beds and soils prepped, designs started, and plants ordered for Spring.  Don't hesitate, get a head start today!
Posted by Abundant Design, LLC at 2:51 PM