As we have said before, drainage easements can cause many problems for the people on the lower ends of the neighborhood. Often times the final grading isn't finished quite as designed, or time causes uneven settling which can hinder drainage.

These easements are generally planned assuming the best way to deal with stormwater is get rid of it as fast as possible.  This can make flooding worse during wet years, worsen droughts in dry years and is not good for local and regional water quality.

This site near Easter Lake was one of those neighborhoods, with our customers being at the end of a neighborhood drainage easement.  Desirable trees and shrubs struggled in the area, and it stayed wet long after rains.  Mowing the grass, where it wasn't drowned out, was a tough and muddy chore when possible. 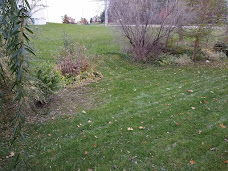 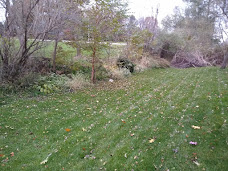 After determining the typical high water mark, upstream water catchment and utilities, we discussed using a dry stream to armor the flow and use native plants to filter some of the runoff.  A mid project rain storm showed us we had good soil infiltration rates.  We determined that with some minor yet creative grading, we could even infiltrate a good amount of stormwater as well - even if beyond the scope of a typical rain garden.

The first step after locating utilities, of which there were many, was to remove the sod, and prune back some of the existing trees and shrubs. 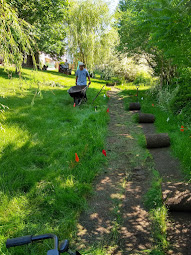 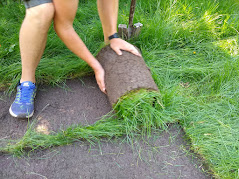 Using care to avoid the utility lines* we sculpted the desired waterway, and constructed the catch basins.  Boulders were used to construct small weirs, dam like structures, and give the streambed a natural look.
*hand digging periodically to locate

Finally the predominantly native plants were put in that will help infiltrate more stormwater as their roots punch deep into the soil.  Blazingstar, Little Bluestem, Columbine and sedges were among these.  Also native edible shrubs like Gooseberry, Elderberry and Aronia, plus a blackberry, will provide backyard foraging opportunities. A stump from a very large old tree was inoculated with Oyster Mushroom spawn as well, easily identifiable and a favorite for cooking with its firm texture.

We all really liked the way this project looked when we were finished! 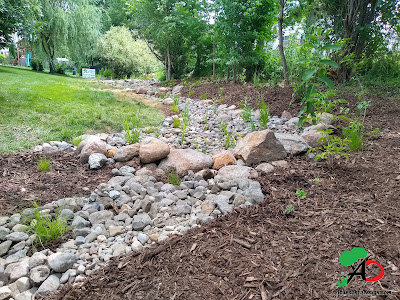 . . . and according to the homeowners, functions just how it is supposed to.