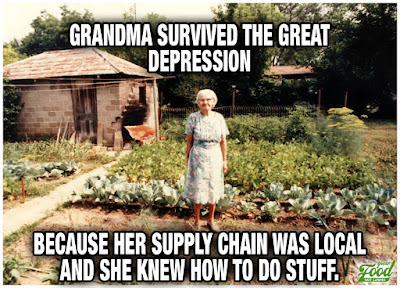 This could about be my grandma in one of her gardens.  I wish I had a picture of her in the garden, and grandpa too for that matter, to share.  I think we do in some of the photo albums at mom and dad's place.  Grandma had the coolest potato slicer, and generally a good bet that she had some homemade cookies in her kitchen, too! 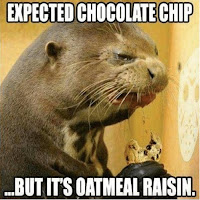 My brother found out the (not-so) hard way in Grandma's kitchen, to look before you leap one day we visited for lunch.  When he thought I had gotten more chocolate chip cookies then he had, and was only given one, he quickly grabbed a second and said, "Jeff got two!" but before I could warn him, Dad nudged me under the table with a sly but subtle grin...


They were oatmeal raisin, which we liked but he didn't!

My brother and I were lucky to grow up nearby, and see them as often as we did.  Grandma always had the hugest rhubarb plants under the purple martin houses they had.  She let wild ground cherries grow wherever they came up in her vegetable garden.  Ground cherry pie was one of my dad's favorites.  Mulberry pie was another she made, with mulberries collected from the tree behind their garage (which grandpa built).  And strawberry rhubarb pie, and crisp, and... you get the idea 😀

She could mend and sew, and enjoyed making quilts.  Most of all she enjoyed her family.  Summer visits were thoroughly enjoyed, but I would imagine Christmas was her favorite time.  Her sons and their families would all visit.  The house was pretty small but everyone fit and so many stories were shared over an astounding array of cookies and treats that she had made the weeks before in preparation.

I drove past their old place Saturday after her funeral.  She had not lived there for several years but the martin house was still up, although they have gone South for the season.  Her clematis vines, now dormant, were still clinging to the trellis on the martin house pole.  Their giant old walnut tree was severely pruned, and not so giant anymore.  Grandpa had trained a squirrel to sit on his lap where he would share a walnut, or maybe some peanuts.  I wonder if the flowers will still be there in the summer - hollyhocks, hens and chicks, impatiens and many more.  Grandma was 100, a few days shy of 101.

Life goes quickly, and the older we get the faster time passes.  As I get older I realize it more and more.  So I'll leave you with this thought this week - when all is said and done we'll have on our memorials the year we were born and the year that we die with a little dash between.


How are you going to live your dash?