Although still used, this raised fire pit space was overgrown and really needed tidying up.  The soil was compacted, and weeds were the only thing growing in this highly compacted area.  The homeowner was tired of fighting the weeds and wanted something done. 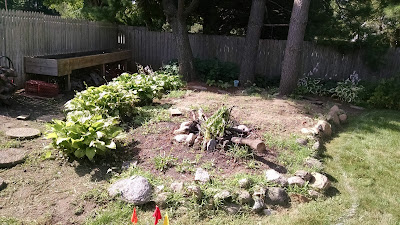 Plans were put in place for a new fire pit and patio area, with new boulders and a potential planting on the back edge.  As the project plan developed, the decision was made to create a patio comprising the whole raised area and a separate raised bed with a mini-orchard and forest garden.  Already avid gardeners, they really liked the concept.

The hostas and daylilies were relocated to the back side of the privacy fence where there was a need to slow water flow, reducing erosion and filtering runoff, coming off of a parking lot.  Hardy plants, they survived transplanting even in mid-summer thanks to quick work and forgiving afternoon shade. 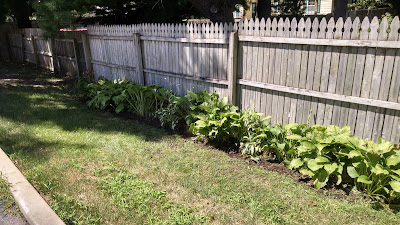 The fire ring of small boulders was removed and the existing walls were torn down.  A new base was dug and compacted.  Serendipitously a stairway formed at the junction of yard, path and patio. 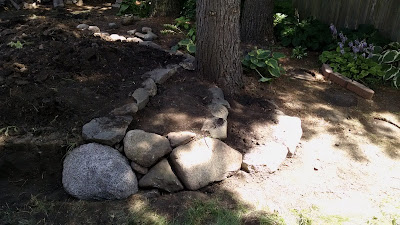 Several tons of boulders were brought in to finish the retaining walls and establish the raised beds for the fruit tree guild.  The entire surface was tamped to stabilize the soil disturbed by constructing the retaining walls.  Next, the paver base material was laid and packed. 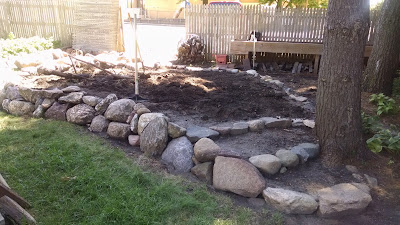 For the fire pit to match the look of the patio, I cut bluestone edging to build the custom outer wall, and a heavy duty fire ring lined the inside. 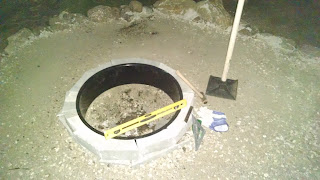 Large bluestone pavers were laid in position, arranged and rearranged for the best fit.  Once a few corners were removed for a tighter fit and the best layout was determined, they were leveled with sand and set in place. 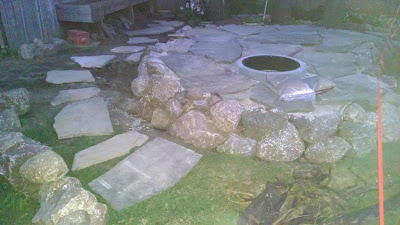 The river rock and stepping stone pathways took inspiration from dry stream beds in the new rock valley.  The path was graded and covered with cardboard "sheet mulch" to kill any remaining weeds prior to laying the river rock and bluestone steppers. 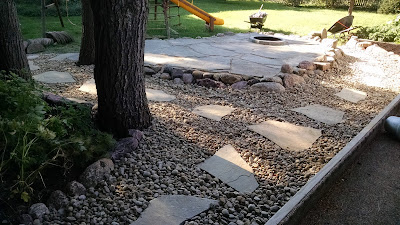 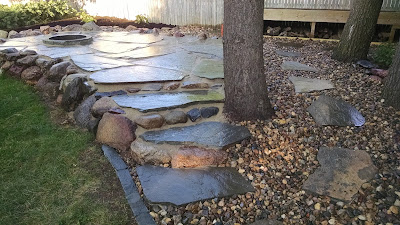 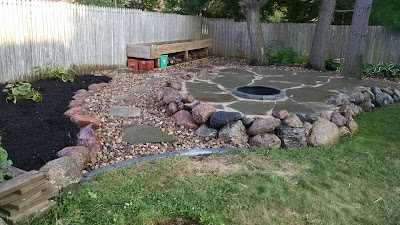 The forest garden bed was seeded with cover crops including radish, wheat and clover to sustain beneficial soil life until apples, strawberries and more were available.  A few modifications were made to the original sketch to accommodate plant availability and future plans.

Horseradish was included in the background for contrasting large leafy texture as well as to be used as a nutrient rich mulch when cut. Clover was included for nitrogen fixing =natural fertilizer.  We also planted a mix of flowers, including prairie natives, to attract pollinators.

Hydrangeas, as well as an additional American Cranberry, were spaced on the right side of the path to enhance the remaining hostas and bleeding hearts. 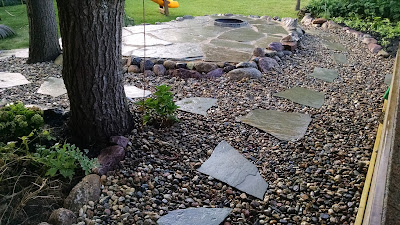 If you enjoyed this project, contact me and we can make a plan for your backyard edible oasis!
Have a great week!﻿
﻿
Posted by Abundant Design, LLC at 2:28 AM