On February 16th the US will celebrate President's Day.  It is also the birthday of George Washington, our first President under our current Constitution.  Our first four Presidents were passionate botanists.  Washington and Thomas Jefferson, our third President, owned some of the largest and most famous estates in America, Mount Vernon and Monticello respectively.

George Washington was a farmer and avid gardener, owning the 8000 acre Mount Vernon estate and farm.  Click here for a Virtual Tour and much more. In addition to being an innovative farmer, Washington was an accomplished landscape designer drawing praises from Mount Vernon's visitors. He planned flower and kitchen gardens, parterres, as well as a greenhouse and small test garden where he kept various plants he was experimenting with.
"...to be a cultivator of Land has been my favorite amusement" Washington wrote.

John Adams was a very influential Founding Father.  Earlier in his career he had worked for several Boston newspapers under the penname "Humphrey Ploughjogger," extolling the virtues of farm life and the cultivation of hemp.  He (as well as Washington) was also interested in compost, and in his letters home he wrote recipes including seaweed, marsh mud, potash and manure, along with animal bedding straw and kitchen scraps.  As the first President to live in the White House, he ordered the first planting of it's garden.  As he was there for only four months the annual vegetable garden was all he had time to do.  As a valued statesman his duties required him to be gone from home much of the time and much of the farm management was left to his wife, Abigail.  In 1801 at the end of his term as President, Adams now 66 returned to the home farm.  He died 25 years later on the 50th anniversary of the signing of the Declaration of Independence.

Thomas Jefferson wrote to artist Charles Wilson Peale, “No occupation is so delightful to me as the culture of the earth, and no comparable to that of the garden. I am still devoted to the garden. But though an old man, I am but a young gardener.”  Although Jefferson redesigned the gardens on the White House grounds and planted hundreds of seedling trees, his true passion was Monticello.
﻿

﻿﻿﻿ Monticello, Jefferson's masterpiece, was probably the grandest private garden and collection of plants in its time.  Originally a tobacco plantation, the majority of its 5000 acres were transitioned to wheat as the markets changed.  Its south facing slope maximizes solar aspect and terrace holds water and reduces erosion.  The vegetable garden is 1,000 feet long and grew over 300 varieties of vegetables.  Below, are six acres of nearly 170 different fruit varieties.  He also planted groves for his "pet trees."  Jefferson is buried at Monticello, dying only a few hours before his friend and fellow Founder John Adams. 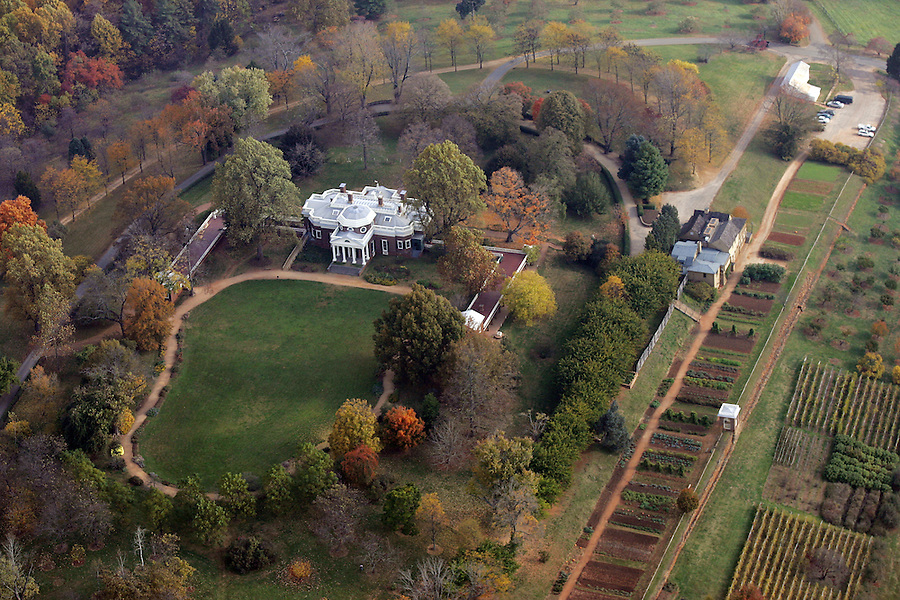 On James Madison's retirement from the Presidency (4th President), he returned to his estate, Montpelier, and championed sustainable farming practices and resource conservation.

John Quincy Adams, John Adams's son and sixth president, implemented many of Jefferson's plans and personally planted many seedling trees including fruit trees, along with herbs and vegetables.  More recently, a Victory Garden was planted at the White House during World War II.  The Clinton's had trouble convincing the White House of the need for a vegetable garden, so they planted a small garden on the roof.
﻿﻿﻿
Our current President Barrack Obama and his wife, Michelle, have reinstituted the White House kitchen garden after years without.  In addition to fruits, vegetables and herbs, the garden includes a bee hive and composting bins.  Motivated by the lack of nutrition in the modern American diet of their daughters, a garden was an easy way to get more fruits and vegetables.  It is also used to promote healthy eating and local food.  The surplus is also shared with local charities.

﻿﻿﻿﻿
I wish you a happy President's Day, and however you celebrate, think of the rich botanical heritage the first four Presidents planted in the fertile soil of our new Republic, and the return of those interests in our current President and hopefully beyond!

By the way, in honor of President's Day, national parks, wildlife refuges and other public lands are FREE!  Or if you can't travel to one of these destinations, follow the links to learn more about Mount Vernon and Monticello, they are truly amazing!